Here's what a few of our customers have had to say about us.
Have a testimonial of your own to share? 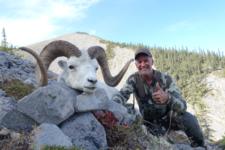 In September 2017 I had the opportunity to go on a combination Dall's sheep/Caribou hunt with Raven's Throat Outfitter's in the beautiful Mackenzie mountains of Canada's Northwest Territories. Raven 's Throat Outfitter's is owned and operated by Greg "Griz" Turner and his wife Ginger. Their hunting territory encompasses 6000 sq. miles of some of the most magnificent country on this planet. It is a vast untouched wilderness of varied terrain and scenery. I have lived between Cody ,Wyoming and Yellowstone National Park for the last 23 years and have had the good fortune of spending a significant amount of time in the backcountry here, so I truly appreciate wild places. It was somewhat surreal to be sitting up on the mountain in the NWT and thinking as far as I could see in any direction...there was not a road, a structure, an area that had been logged not a camp or other human being that was not with our group really amazing. The area is rich with game sheep, caribou, moose, grizzly bears , wolves, wolverine's and the list goes on. The base camp is on a beautiful lake loaded with lake trout and grayling . Access is by float plane and the flight in was awesome . Hunter's quarters are comfortable with propane heat and a central bath/shower area. There is a centrally located dining area with a large deck overlooking the lake. The food was outstanding and the chef, Beth, took great pride in the meals she provide d. Access to your hunting area was by helicopter. The area is so big that it would take days on horseback to reach many of them. By allowing access by air keeps easier to reach areas from being over-hunted and minimizes pressure on any certain places. You cannot hunt for 12 hours after flying so we would usually fly out to our spike camp in the afternoon and set up camp. We could glass from camp but not go out into the field. An evening meal and then a good night's sleep and off on the hunt in the morning. All hunting was done on foot but the terrain was not that difficult to hike around in. If you spend some time preparing to hike you should not have any problems getting around . I was lucky to take a really beautiful ram and a very nice caribou. My ram was in a group of 5, 2 other's were just as nice. That group was not hunted again that season......that is the beauty of being able to manage your own game herds. Those other two big sheep were left alone to breed and if they make the winter will be there next fall. This trip was truly one of a lifetime and I cannot say enough good things regarding the entire adventure. I am planning to go back as soon as I can l know there is a big Alaska- Yukon moose waiting for me out there! 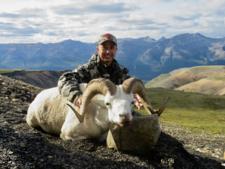 I had the opportunity to hunt with Raven's Throat for Dall sheep this past August. I've been on several sheep hunts in the past and had hunted sheep with Griz in Wyoming when he owned Lost Creek Outfitters. I had a wonderful time with him then and knew I had to experience the NWT with them. From booking, handling travel, constant updates from Ginger, accommodations in camp, to the actual hunt...I was BLOWN AWAY! This is one of the best run outfits I have ever been to. The attention to detail was second to none and you can clearly see that Griz and Ginger have put their heart and soul into this. The country that they get to call home is something that every hunter should try and see once in their lifetime. Thank you to Raven's Throat and their entire crew for an experience I will never forget! The ram I was able to take was a dream ram, but the memories and friendships created were the real trophy. 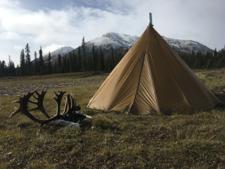 I was fortunate to hunt with Griz, Ginger and crew for sheep and caribou after another hunter was forced to cancel. I had hunted sheep, unsuccessfully, the past two years in Alaska and was excited to try something different. Boy was it different! I was able to shoot a great ram and booner caribou over the course of just a few days. But, the real highlight of my hunt were the people I met. Griz and Ginger were nothing short of amazing in their attention to detail and hospitality. They truly love what they are doing and it shows. Great comfortable camp and outstanding guides. My problem now is trying to figure out an excuse to come back! 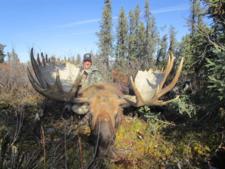 The McKenzie mountains have always intrigued me, and upon flying in they didn't disappoint. The quality of game, the sheer beauty of such a raw and undisturbed place, is unequaled to anywhere I have previously been. I hunted for moose,caribou and wolf and can say the only thing I wish I would have had, was additional tags. I had such a great time with my guide and upon returning to camp the rest of the crew made you feel like family. Everything is top notch, from the pilot to the food. Can't wait to return and hunt sheep! Thank you guys for such a memorable and rewarding trip of a lifetime!It doesn't get any better than this! 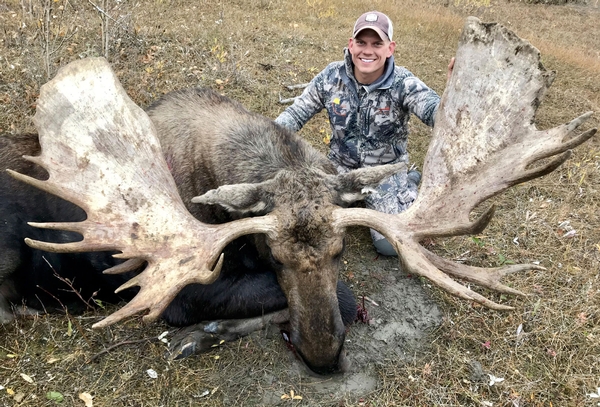 It has been a few months since we were in camp at Raven's Throat, which has allowed me to reflect back on how amazing our experience with you really was. It was a trip that my dad, brother and I had dreamed of going on for many years and it truly lived up to our hopes. From the moment we jumped off the float plane we felt welcomed by the whole crew as they met us at the dock. I was impressed with the staff, the facilities and all that you have done in such a short period of ownership. It felt like you had been operating for many years as it was such a smooth and organized hunt. It is clear your operation is very passionate and motivated by the love of what you do to create positive experiences for your clients.

I really enjoyed the opportunity I was given to float down the Redstone River, as the scenery was beautiful and we saw all kinds of game. Caribou were everywhere and it was pretty incredible to call moose in from multiple camps on our journey down river. The morning I shot the moose still feels like a dream... I could not believe we had both a caribou from the night before AND a giant bull moose down within sight of camp. We had a lot of work in store for us and it was a relief that Griz and Matt were able to help out with the chopper. It was also really nice to use the chopper to drop my dad and brother at our camp towards the end of the trip.

It was special to have a couple days to spend together with hopes of having an opportunity at a wolf. Once back at the main camp I had a lot of fun catching grayling, lake trout off the dock and relaxing with everyone. It was unfortunate my dad slipped on ice and broke his ankle on the day we flew out, but thankfully it was at the end of the trip. I hope you're all doing well and it looks like you had an impressive end of the year. I'll continue to follow Raven’s Throat and I know in the future we'll have to book well in advance because everyone is finding out how great this place is.

Thanks again for the hunt of a lifetime, Josh Herzog

First class, flawless, spectacular. Don’t have the adjectives to describe my archery Dall sheep / mountain caribou hunt. Guides, staff , pilots all had great attitude and were exceptional. Most impressed by what they accomplished with just 4 months to prepare. Can’t wait to go back

Send us a Testimonial

To our past clients: We appreciate your comments and if you would, fill out the form with comments and a photo about your experience at Raven's Throat Outfitters. Fields marked with * are required. Please enter the Name field how you want your name to read on our website (Examples: John Doe, J. Doe, John D., John Doe Corporation).